Team Racing in a nutshell:

In addition to our fleet races, we also have team racing regattas.  While there are many differences between fleet races and team races, the most significant to us will be the course.  As usual, there will be a meeting held by the PRO where he or she will explain the course, but team racing usually follows what is called the Starboard "S" course, because it kind of looks like an "S" laid on it's side. (See picture below)  You round the first two marks to starboard, and the next two to port.  The other main difference is that we will sail in either 2-boat or 3-boat teams, and scored as a team.  That is the score will be determined by the total score of the 2 or 3 boats.  If in a 3 boat race, for example, if we finish 1,2,4, our score will be 7.  This makes the strategy and tactics for team racing much more complicated, but the basics are the same:  Try to sail your boat as fast as you can, and try to avoid being blocked by the other team 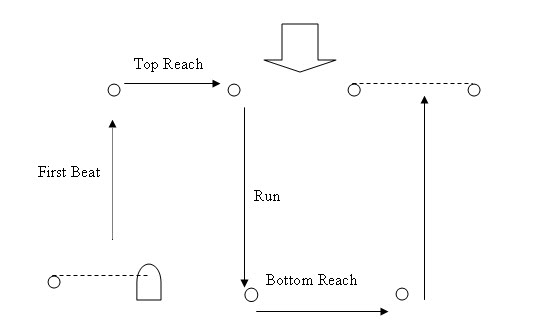 :Team Racing is normally based on 3 identical boats in each team racing against another 3 identical boats.  It is the team result which counts rather than individual performances. In practice the races are short tactical events where boat speed is of lesser importance and a knowledge of the rules, and maneuvering ability are paramount. A contest would normally consist of a Round Robin(s) where each team races each other team and this is followed by a final series of the top teams. If time allows a 'plate finals' might be sailed amongst those teams eliminated earlier. Races are timed to last around 6 - 9 minutes although races as short as 5 minutes are quite effective. The course length is quite short depending on the class of boat being used. Course is usually the “Starboard S” course, but RC’s might set up a course shaped like a box or one shaped like a “W”..